The saga of Fridtjof the Bold 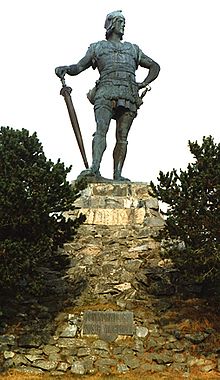 Friðþjófs saga hins frœknan - the Saga from the 14th century about Fridtjof The Bold tells the story about Fridtjof's struggle to marry Ingebjørg. Esaias Tegnèrs published the saga as a romantic story in 1825. The saga is supposed to have been from the 8th og the 9th century.

Fridtjof the bold and the king's daughter, Ingebjørg, grew up together as foster siblings with the farmer Hildeng in Sogn. The saga-hero's father was Torstein Vikingsson, who lived in Framnes, today's Vangsnes. Ingebjørg was the daughter of King Bele, and sister og Helge and Halvdan. Bele and his sons didn't think Fridtjof was good enough for Ingebjørg, and sends him out of the country. Ingebjørg married the old King Ring, in ordre to prevent a war. When Fridtjof returns home to Norway, he starts serving King Ring. After a short time, the King dies, and Fridtjof inherits both the kingdom and the queen, and becomes king of Ringerike and Sogn.

The saga of Fridtjof the bold was very popular in Germany and England in the 19th century. And the German Kaiser had the statue made in Berlin, and ericted in Vangsnes. 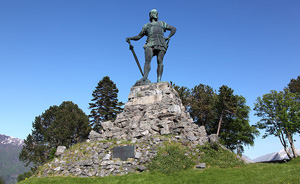 In order to seek rest after heavy and responsible work, I seek to these surroundings. I have for the past 20 years travelled with my ship to the north, and in Norway I have been met by traditional germanic hospitality. I had an urge to show my gratitude towards the Norwegian people. Through the holy saga I found the opportunity to do so. I found the saga of the ruler from Balestrand, King Bele, Ingebjørgs father, the brave hero, most appealing. This is now unveiled before our eyes, King Bele by Gørtz' skilled hand on the burial mound in Balestrand, while Fridtjof is the masterpiece created by professor Unger. 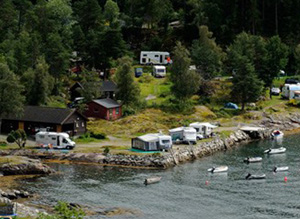 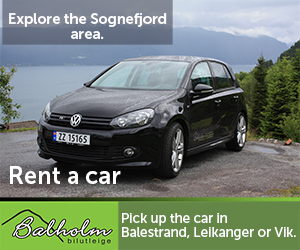 Shop: souvenir and giftshop of all our handicrafts.